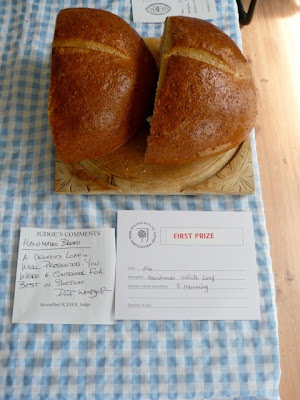 I received an email the other day from Sally who used the Ben bread recipe (with a few tweaks) to make a prize winning loaf of bread at her Village Show...in England!!! How cool is that? 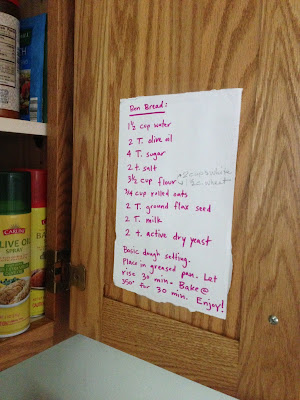 Speaking of Ben bread....when we moved, I discovered that I didn't bring the recipe along. I had accidentally left it taped inside the cupboard door in our previous house. I was so disappointed until I realized that I had blogged the recipe. (What a relief! Blogging is so handy sometimes!) I've since copied it and taped it inside the cupboard door in our new house. :) It's definitely a keeper!

(By the way, I'm curious. Do you have a favorite recipe taped on the inside of your cupboard door? Our previous house came with the recipe for rice krispie treats taped inside the cupboard. That always made me chuckle.) 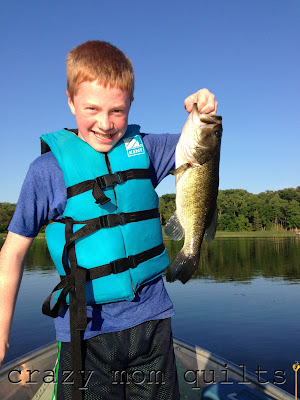 This summer is flying by, as it always does, but we are soaking up every minute of it! We've been doing a lot of fishing and we have caught some pretty big fish out of the lake. My older son is HOOKED. (I may be, too! I learned how to fillet fish. On my 38th birthday. Out of necessity. Never thought I would be doing that!) 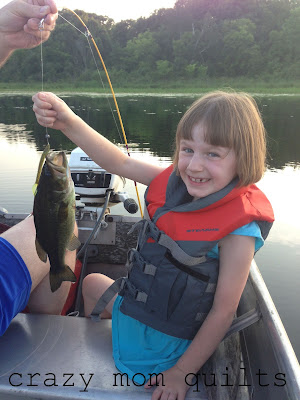 I LOVE the look on my daughter's face in this photo. We were all a little bit shocked that she caught such a big bass on her little pole. She was ecstatic.

My kids joined in the quilting fun this week. It's just too hard to resist, apparently. 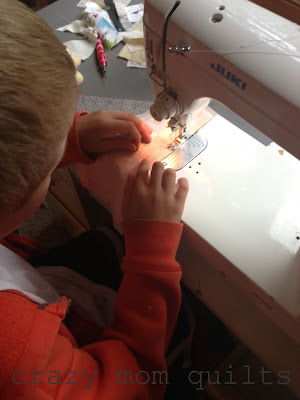 My 10 year old has become quite good at sewing a 1/4" seam. SO much better than last summer. It's not like he was practicing or anything, he's just become much more coordinated and careful in the past year. I may have to put him to work! 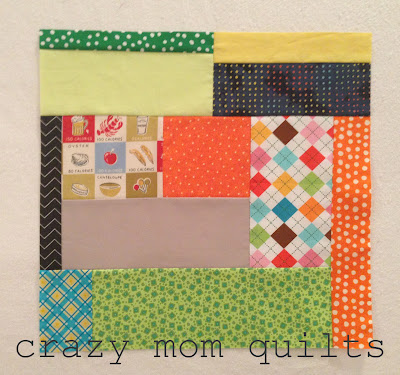 Here is the start of his slab quilt. He's planning to make it big enough to use on his bed. I've been helping him cut some pieces and I've been squaring things up, but I'm trying to let him pick most of the fabrics and the arrangement. I do suggest and steer him along a bit (because I just can't help it!). For the most part he's doing the bulk of it and he's doing a great job! 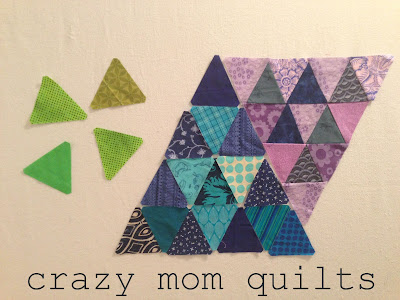 This is my oldest child's quilt. He started last year (or maybe 2 years ago?) with the purple block. He drew up a sketch and came up with a great plan to make it into a larger quilt. It's going to be fabulous! He's using the Go! baby to cut the pieces, which is so much safer than rotary cutting! He's eager to get sewing. 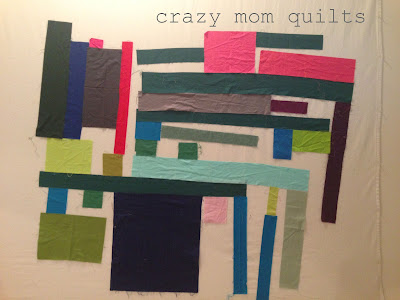 Here's the start of my daughter's quilt. She is designing her second abstract quilt (and already talking about the next few in the series)! You can see her first one here. This should be fun to sew up. (I'm serious!) She's so creative and I love seeing her run with an idea. If she had her way, she'd design all day! I'm totally going to have her iron all these pieces while I sew. 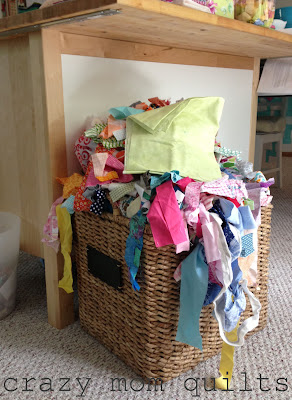 This is the state of my scrap basket these days. Before retreat a few weeks ago I dumped the majority of them in here. It's just a tad full, huh? I've got a lot of sewing to do! 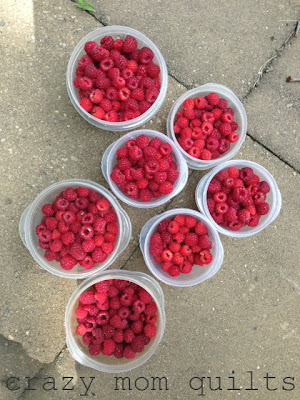 Last but not least, we've been picking our fill of raspberries. We have a large patch in the back yard that have been producing like crazy. What a treat!

I'm linking up with Cindy for really random Thursday.

Happy August to you!
Posted by Amanda Jean at 3:51 PM

Sounds like you are all having a fun and productive summer - enjoy!

I have about 15 recipes inside my cupboard for all of my standards. My current fav is No Bake Energy Bites, which we're blasting through this summer! Happy raspberry eating, Amanda!

Wonderful that your kids are learning to piece! Yummy raspberries!

I have a couple of herb and spices charts (from magazines years ago). So if I am looking for something to jazz up the pork chops or green beans, I can skim the charts and see what herbs or spices go with the dish.

The inside of my cupboard is full of phone numbers. The recipes are on the side of the fridge!

Looks like you are having a fabulous time with your children. I love that they get the chance to design their own quilts. Love the fishing too!! Have a great day.........Marie (mlismore@optusnet.com.au)

Loved seeing the kids fishing. It is a lot of fun. And seeing what they are working on in the quilting department, too! My son does like to quilt and he is my go-to-guy when I need a second opinion or suggestion for a project. Especially concerning colour choices. Isn't it great to share a love of creativity with your kids? Thanks for sharing that love with us too, Amanda Jean!

Recipe for Caesar dressing inside the cupboard door for my husband when I was gone on retreat. You are not supposed to learn how to fillet fish, don't you know that? 42 years in Alaska and I have managed to never learn how. N

Hey Amanda - Jill here from OH (we met in GR last year!!) - I have 2 recipes taped inside my cupboard - a margarita recipe from a restaurant I was at in Mexico 3 years ago & the recipe for homemade window washing - I HATE to buy i!!! I also have my plumbers name & number taped in there!! Love the raspberries!! My sister in IL picks them all summer - I miss them!! WHere do you live now? Happy August!!!

I have the recipes for pie crust and pizza dough taped to the inside of the cupboard door.

Just had to let you know that I have my favorite bread recipe and chocolate chip cookie recipe taped inside my cupboard door! (My grandma always had her favorite recipes inside her cupboard door too!)

all your children share your quilting talents, I can see them fighting over the machine in a few years time!
Re recipes I do ot have one on the cupboard door but I have a recipe book that Dad gave to me in 1965 which is now pretty full, my favourite is for a pineapple cream pudding that Mum always used to make and now I make it every Christmas to carry the tradition on.

So fun to see that your love of quilting is contagious. Or genetic. Or something that your kids just want to be involved with mom. In any way, I love that you include them and enhance their learning and creative skills so well! And yum - great looking raspberries!!!

Looks like you are fully enjoying your summer! Hope my kid(s?) will enjoy something creative if not sewing. That bread looks delish!

Thanks for the recipe!

I love it! Quilting is great family fun. It has the dual purpose of learning/teaching skills and bonding.

The bread is great. I have the recipe memorized. I guess that's what I typically do with the recipes I use most - so there aren't any hanging inside my cupboard.

The raspberries you gave us made awesome jam, which goes well with the bread.

Wowee - those raspberries look amazing! I loved every bit of this post - your children's quilt tops in progress, the fishing and the fantastic bread recipe (I'm so looking forward to making this - can't guarantee it will win any prizes though!) had me smiling from beginning to end. Oh, and I love your overflowing basket - that brought the biggest smile!!

Speaking of recipes, here's my favorite thing to make with raspberries this summer. Yum!
http://smittenkitchen.com/blog/2009/05/raspberry-buttermilk-cake/

Hope you are having a great summer Amanda and enjoying your new place. It looks awesome! Sending a hug your way.

Yumm!!!
Just finished making this bread and we really like it!!!
Did Sally say what she did differently?
I don't have any recipes inside my cupboard door but this one is definitely getting a special recipe card!
My husband is cutting another...eating another slice right now!
Your sons quilting is wonderful too!

Made your fabulous bread - we enjoyed it with home made Coriander & Lime Hummus! Divine.

I used to have my recipe for waffles inside my cupboard door, but I know it by heart, so I no longer need it there.
I remember visiting someone once who had their favourite recipes painted on the outside of their cupboard doors, decorated with pretty floral borders. Fun idea if one has that kind of painting skill (which I definitely don't!), I think :-)