Last night I finished knitting my very first sweater! I'm so excited that this project is ALMOST done! I had to laugh, because after I cast off the second sleeve, I tried on the sweater and THEN I realized that one cuff was about 3 rows shorter than the other. I had measured, but apparently not carefully enough! Doh! I decided to shorten the first sleeve rather than try to splice in a new strand of yarn on the second sleeve. My kids told me to just leave it, and that no one would even notice, but apparently they don't know me at all. Hahaha! Of course I had to fix it! 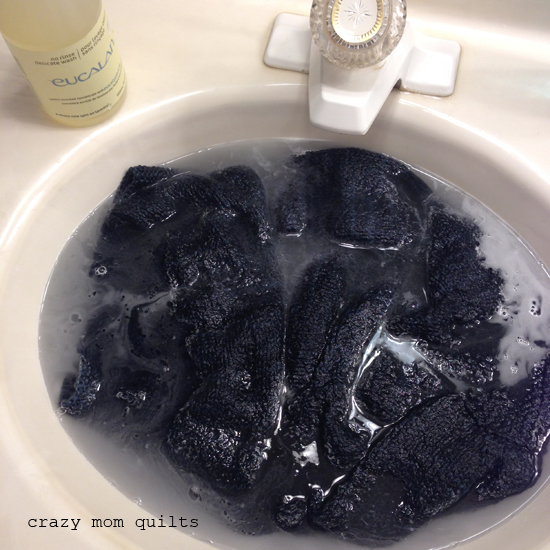 I have heard about blocking sweaters, but I didn't know much about it, so I used this helpful tutorial from Tin Can Knits. This morning I soaked my sweater with Eucalan (which was purchased at my local quilt/yarn shop) and now it is blocking. I found it kind of odd to place it on cardboard, but I guess it works. 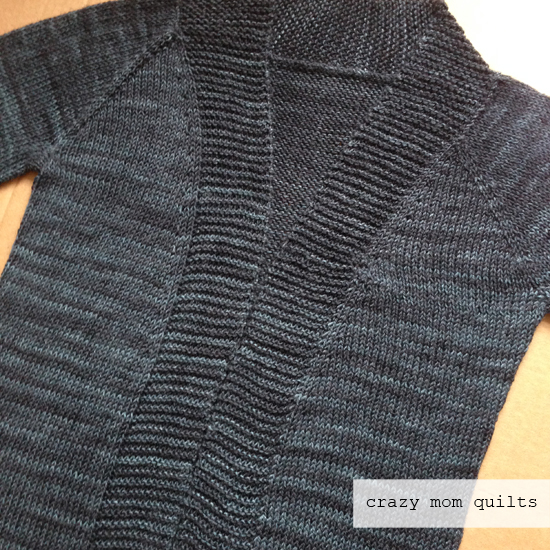 I can not wait until it dries so I can wear it! Thankfully (?!?) we still have plenty of chilly mornings ahead of us, so I should have an opportunity to wear it this season. 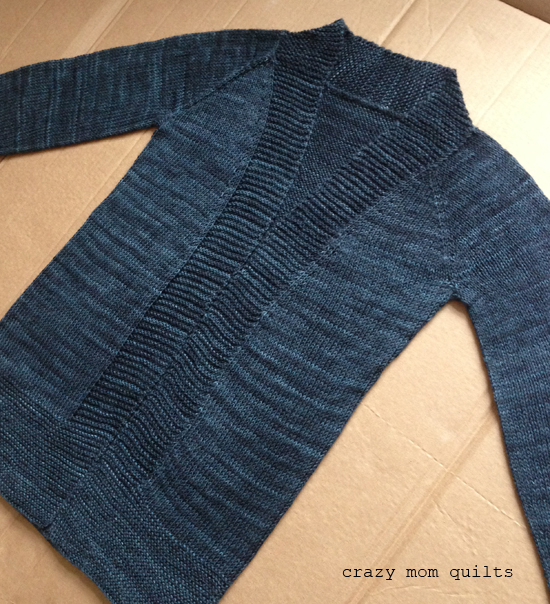 I will try to get some photos of me wearing it, eventually! (Although I'm not looking forward to modeling it. Ha!)

Since the sweater was successful, it looks like my entire family won't be wearing matching hats and gloves after all. I bet they are sooo relieved!

Happy Monday to you!
Posted by Amanda Jean at 2:12 PM

It looks fantastic! I hope you enjoyed the process. May there be many more!

Very pretty! That is a fabulous first sweater.

Congratulations on your first sweater! Someday I'll get there!

If you don't want to use cardboard a very large bath towel is great for that and the back(light colored) of a heavy quilt works, too.

It looks great!!! Congrats on your first sweater. You may want to invest in a blocking mat. It has squares that really help in keeping things straight. ~Jeanne

It's beautiful, well done!!! Now I want to try knitting a sweater too :)

Congratulations - that's a great achievement indeed. And it's looking great.

It's beautiful! Glad you could fix the sleeve issue painlessly!

I don't know much about knitting, but this beauty makes me want to learn!!

Yippee!!! What a great accomplishment! I do declare you have a fine piece of knitting on your hands, I mean, body. :)

It's so beautiful! Of course, it's no surprise that you do great work on your projects. I look forward to the modeling pictures. :)

It's beautiful, congratulations on your first finished sweater! Can't wait to see it on!

Congratulations on finishing your first sweater!

That's a beautiful sweater! I bet you will get alot of use out of it. I haven't knitted a sweater for years, but maybe I'll get around to it again someday. Great job!

Good for you! I've knitted a few very basic little sweaters for a child, but haven't got the courage to try one for myself. I hope we get to see a pic of you wearing your creation!!

This made me laugh in several places. Love the sweater!

It's beautiful, Amanda! Congratulations on your first sweater.

Wow, pretty! Love that color. Can't wait to see it on you. I've only knit a few sweaters and the feeling of accomplishment is sweet.

Love the sweater. I have the pattern and want to try. You are my inspiration. The pattern and site was recommended to me by my local yarn shop owner.

Your sweater looks beautiful. I would be proud to wear that! Nicely done!

Shame. I was looking forward to a family photo of matching hats and gloves. Love your sweater. So glad you still have some cooler mornings ahead of you to enjoy its lusciousness (and admire the equal sleeve lengths!). x

Beautiful knitting. Really need to get enthused and take some refresher lessons. Congrats!