I've got a little boy that is turning 10 soon and his number one birthday gift request was NOT for legos. I about fell over! Rather, he requested a huge pillow like his brother's, except in blues. Isn't that the sweetest? It made my heart so happy. I hope he isn't too disappointed that some green and gray are going to sneak in there, too. I won't be able to resist doing so, as hard as I try. Those colors were made for each other! 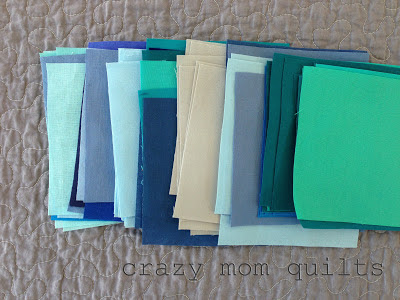 On the flip side.....my oldest does NOT want his little brother to have a pillow like his, because it will make his pillow less special. "Oh, brother!!!" is all I can say to that. He's going to have to deal with it. :)

Speaking of my darling boys....they made up a hexagon star wars legos game, which kept them entertained most of the day yesterday. Hurray for that! The game board is the shown below, and it inspired me to dig out these pre-cut vintage hexies that I acquired few months ago. Aren't they so pretty? I have a few ideas brewing, but there just isn't enough time in the day! Hopefully soon, though! 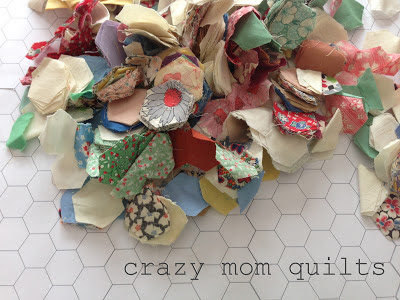 Happy Tuesday to you!
Posted by Amanda Jean at 12:55 PM

Isn't it especially sweet when your sons appreciate something made by mom. Not sure why that is. I guess because we associate those "home" things with girls.
With both my boys and my girls, however, some of my sweetest memories of things they have said are:
*but I like the jammie pants you make the best.
*no, I want the blanket YOU made.
*your birthday cakes taste best.
*can you help me sew this the way you do it?
*You're going to make those cookies for my team again, right? Your cookies are their favorite.

Oh, and the vintage fabrics in those hexagons...LOVE!

Hmmm. Your boys with their pillow issue sound suspiciously like my girls!

I know that did make you feel good. I was stunned when my far too old for this daughter vetoed me making the same baby quilt (scotties) for my niece that I made for her. Since it was my first quilt, and very far from perfect, it warmed my heart to know she loved it that much (so many years later). Since it didn't really matter (they lived far away and didn't know my original plan), I melted and let her have her way.

So true...there's never enough time in a day! But there's tomorrow! :) It's always a great feeling when my now adult sons ask if I can make a specific item they are looking for.
Your colors for the pillow blend together well!
~Judy

When my 21 year old daughter was little, I made her lots of dresses that she wore to church, concerts, special events at school, etc. She told me that I am not allowed to give them away--they are all in a box in the basement. She wants her daughter to be able to wear them someday.

Isn't it great when they ask for the things that you pour your love in to? When my son was accepted to college, he immediately asked for a quilt in the new school colors. Such a delight!

Melts my heart! Ignoring the older one (as I would do with my own, LOL)!

Just great that is what he requsted. It would make any quilting momma proud. The older son will just have to get over it.

Aww, that's such a cute request! The colours look great :)

That is super sweet...my 5 year-old son was ELATED when I made him a quilt for his birthday...hopefully the appreciation for mommy-made will continue until (and past) his 10th birthday! :)

Seriously? You have some of the sweetest kids ever! Must have been raised right.

What a sweet request! My 7 yo daughter would love a mega pillow so I think I will have to make her one. :)

OH i love that pillow. I can see why your boy would want one, especially since older brother has one. I'm stashing away fabric to make some for my boys. Thanks for the idea!

Lucy | Charm About You said...

That is so cute!
Love those vintage hexies :)

That is so cute! My mouth would fall open if my boys didn't want toys. The sea/jewel colours are gorgeous. And just like the older sibling to want to be 'special'! My daughter is the oldest and I swear she was born to be an only child! Instead she's the oldest of 3.