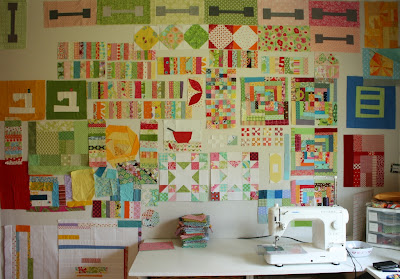 I've noticed that my design wall ends up being a place for block storage rather than for designing. But I don't really mind. If nothing else, it's good to keep the blocks out in the open so I don't forget about them. :)
I almost always end up designing on the floor instead. It's easier to shuffle things around. 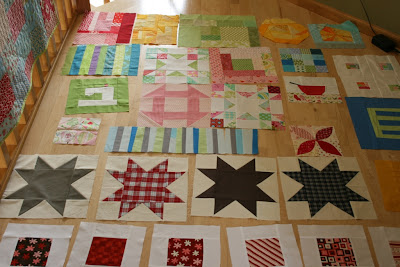 This was going to be the start of a kitchen sink quilt, but I wasn't feeling it. Yet. Rather than force the issue, I threw all the blocks into an orphan box and I'm letting it process a bit more. Maybe if I work it out in my head first, I'll avoid some major stitch ripping. Here's hoping so! I guess I have plenty of other things to work on until (further) inspiration strikes.
Posted by Amanda Jean at 6:43 PM

Wow. That's an impressive wall! I spy with my little eye two awesome sewing machine blocks that I saw in progress!

Is that batting on the wall? How is it held up? I have a picture frame with felt inside and it is so big,but I like yours now-lol!

fun to see the variety. thank you for sharing.

I love it Amanda,so pretty to look at while you are sewing too!

Your wall looks amazing. Makes me think I should delve into my parts drawer one of these days...

wow, what a pretty wall! I like to arrange on the floor too, but I don't even have a design wall, so who knows if I'd like that better.

Wow, you design wall looks great! I'm so short most of my designing is done at the bottom of the wall or on the floor.

Love your design wall! My sewing room was emptied out to make way for a crib. I'm sure my husband wouldn't appreciate me hanging quilt blocks all over our bedroom walls!

I only noticed those sewing machine blocks after reading the first comment! Love your wall!

what a great wall! i bet it helps just to keep it all together!

Wow your wall is Huge! It's impressive to see all your blocks up there. Best of luck getting all those wip's done. :) You could almost make a "kitchen sink" quilt with what you already have.

I like you comment about the "kitchen sink" I know the feeling sometimes things just have to jell awhile. Your design was is great.

I used to have a design wall that size in my hallway, but it was too far from my sewing room. So now I have a teeny design wall. I'm envying the size of your big time!

I am intrigued by that yellow rose! It would be the perfect accent for a wedding quilt I am making for some good friends. Is that your own design? I'd be grateful for any tips. Thanks for all your sunny colors and inspiration!

I am loving your design wall, it would be fun watching it change and evolve over time! It looks like a happy vibrate place to be!

You have the start of something wonderful there! let them percolate in the orphan box... I have a new silk one in the works... I started with a bang, and now they hang waiting....and waiting.... ;-)

I love that idea. I am starting to get a nice pile of odd blocks that don't fit any quilt. I think I will make a quilt like yours.

LOVE your design wall! It's so happy-looking.

Love, love, love your wall!!! I'd be smiling every time I walked in that room!

I think it is not working well together because you have two color pallets there. You already have them divided. Most of what is on the wall seems to work together better. Of course all the blocks are wonderful and I know you will end up making a MAGNIFICENT quilt like always!

I'm happy to read you use a design floor. It's what I do too. It'd take me years to acquire that many orphan blocks!

I like your design wall. The blocks are awesome, I will be interested to see what you do with them.

Oh, I think I want a design wall now. that looks better than hanging art. Love all those blocks up there.

You have a lot of great blocks up there! Very pretty.

I love the idea of a kitchen sink quilt!!! Thanks for sharing!

Neat idea for orphans ---- have you made up any more of your band-aid blocks? I didn't see them in amongst your 'kitchen sink' creation and I liked the revamp with paper piecing! Also, just wanted to say that I've enjoyed your scrap-busting monthly quilts. I haven't made it yet, but Movin' on Up from February is on my radar. I've got a stack of 4" scrap squares that need a good home. {grin}

I loved staring at your wall when I was there.

Oh, what in inspiration looking at the blocks as you stitch away!!

I would think of it as ever changing wall paper! So pretty!

What a lot of lovely inspiration - I always end up designing on the floor too.

I've only recently put a design wall in my studio. Maybe someday it will be as bright and colorful as yours. Great wall!

Love your design wall! What a beautiful and inspiring backdrop for your sewing space.

I have been using my design wall in the same way lately - for block storage. After a couple months, I still couldn't decide what to make with the hodge podge of blocks, so I took them down. Nice to have a fresh wall! Great idea to make a kitchen sink quilt. I hadn't thought of that - would be such a nice way to put those odd pieces together.

Love your wall! The little block that looks like a bowl and spoon really caught my eye though. Very inspiring!

How inspirational! I love it :)

Rachel at Stitched in Color said...

Oh, thank you for saying that designing on the floor is easier. That makes those of us wall-less feel a little better ;)

You could make tons of beautiful pillows ;-) One block for each pillow.

(I need a design wall- NOW! I always lay out on the floor or couch)

I have two sections of design wall - an 8' x 8' section that I use for designing (and try not to use for storage!) and a 7' x 8" section that has become storage for ideas, work in progess, binding that I don't want to misplace and at the very top I display small art type pieces of mine and that I have collected. If I had more wall space it too would be filled up! A person can never have too much design wall!

It isn't batting, it's actually a king sized flat flannel sheet that I stapled directly to the wall.

The yellow rose block was kind of an accidental block. It's not really my design. It's a hybrid of inspiration from comfortstitching's recent quilt along tutorial and a little collection's ribbon winning rose quilt. Let me know if you would like the specific links! Basically, the block is constructed like a log cabin block with extra logs added to the corners of the blocks. Hope that helps!

Interesting...you have a design wall and resort to using your floor. I use the floor and want a design wall!
Cute blocks!!

I love the sewing machine blocks too! So cute. I would love to make a wall hanging for my sewing room. Are they your design? Off to search the great web. Thanks!

Yes, the sewing machine block is my design. I improv pieced them at a retreat I went to in April. :)

I love seeing all those blocks on your design wall. They really do look fun all up there together, and I can't wait to see your kitchen sink quilt when you feel you have more inspiration. I wouldn't know where to start! I am still in love with your sewing machine blocks!

I think your fabulous design wall is doing just what it should... letting you eyeball all your blocks at any time, and allowing them to be seen instead of forgotten in boxes, only to reappear in 3 years with half the zeal as they were started with.
Our house is on the market right now so I cannot have a design wall up - a few different sets of blocks are cozy in boxes, I really do miss seeing them!

Love your design wall - so colorful and inspiring!!

ooooh, I want a design wall. Yours is so colorful and fun!

I like the design wall. The sawtooth stars helped me with my next quilt idea, too.

Your wall is really inspiring! Such great colors!

I like to use my design wall to check my quilts before I quilt them - I can stand back and squint to see if I have globs of colors somewhere (I make a lot of scrap quilts!)

Hanging it on the wall also gives me a chance to step back and think about the quilting designs.

Just a piece of cheap felt tacked to my wall - and I use it every day!

I guess blogger did do something weird -- but I wanted you to know that I saw your reply regarding the rosette block and have mine underway. Thank you!

I was just thinking I'd love to see all those blocks put together into one quilt. fabulous and creative design wall.

I don't really have room for a design wall, but I like being able to see all the different blocks on yours. I imagine it helps focus on what you want to do next...or finish next!

how inspiring it must be to sit in front of your machine and see all of those pretty blocks. thank you for sharing a photo of your sewing space.

I LOVE the pic of your design wall!!

I wish my design wall looked that happy and colorful! Thanks for the beautiful pictures! I loved them!

This is very inspirational! Love your wall :)

The white, pink and green star? x? blocks in the middle are so pretty. Such a fun and springy color palette that works great with that block. Love it!

I love your design wall. Can you share how to make one? thanks

Sheesh! I love your design wall. What a lot of great creations on there :)