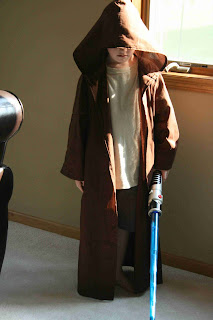 My boys are a little obsessed with Star Wars. Last January, when we went to Disney World, we went to the Jedi Training Academy. My boys were thrilled to see the characters in person. They didn't get chosen to participate in the training exercise, much to their disappointment, but I did promise them that I would make them some robes when we got back. It's 8 months later and I finally made good on my promise. Well, I'm half way there. One robe sewn and one to go. 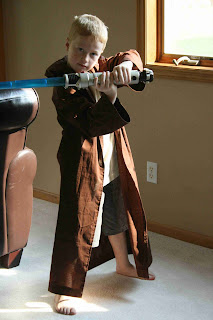 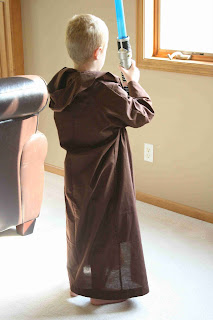 and Simplicity 3575 for a pattern.
I omitted the tie around the waist. 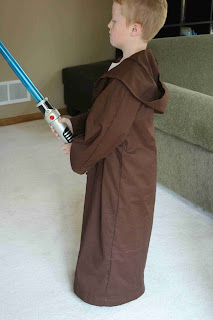 I started last night (with a little help via phone from my expert seamstress friend Linda)... 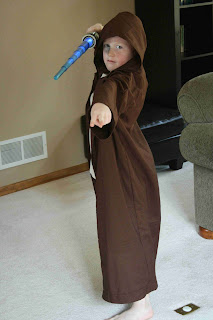 and I came up with this. He was so very excited. (And I was, too, actually.) He was walking around in character this morning. When I asked him to put some things away, he grabbed the items, bowed to me and walked away silently. It was so funny.

I'm not a fan of patterns, but this one was pretty easy. One thing though, sewing a 5/8" seam allowance was a trip after sewing 1/4" seams for years.

Although this isn't a tutorial, this is the best Christmas gift idea I have for boys, for those of you who asked. It would work great for Halloween, too.
Posted by Amanda Jean at 4:27 PM

Very nice. I hope my husband doesn't wander onto this blog, because he'll be wanting one. :)

you did a fab job! we went to the jedi training and my daughter was picked and not my son. oh my, my son was not pleased, but he handled it well.

THanks for all the good ideas on your blog, the robe is very cute.

I thought of a couple of tutorials I'd love to see on your blog: a simple girl's wallet with optional zip-up coin compartment (possibly also with a tutorial on how to buy/sew in zippers). Also, along these lines a nice structured tote to match the wallet. And 2 types of aprons for young girls: an artist apron and a ruffly one (with a tutorial on how to ruffle it up--ie how to do gathering).

Love the Jedi robes! Perfect for Halloween! It certainly looks like he is having fun pretending!

I have a house full of boys who would LOVE those.

I think Carter dressed up as a "middle-aged man who starts a town riot" for Halloween last year. Remember that nonsense?!? Oy. Who knows what they'll come up with this year ... I'm afraid to ask.

such a cute costume!

oh, he must be so happy with that! great job, mom!

Awesome! I made one of these 10 years ago for my younger brother, but in black. He was Darth Maul for Halloween and needed a robe. I can't believe it was that long ago! Your son looks great!

Very cute! Does this mean you'll have Halloween done early this year?

This is so great! My 4yr old daugther is loving star wars right now too....and she doesn't even know what it is! LOL! I guess some of kids with older sisters are talking about it! So funny!

Hey there, I found you while searching for inspiration for my fabric pile....I just don't get how you have time to do all that you do! I am impressed for sure.

Awesome!
I remember making some for my boys years ago. They were a favourite and received so much use. I couldn't think of a better gift idea for a boy either!

Oh, I'm gonna have to find this pattern for my son... he's 7 & hugely into Star Wars! Last year he was a clone (store-bought), and Darth Vader (homemade) the year before that. He hasn't decided about this year (though he would still wear the clone costume if it still fit!), but I imagine if he sees this he'll go for it. He already has the lightsaber! Thanks for the great idea... I didn't think about there being a robe pattern!

that's cute...great item for boys to play "dress up"

It looks great - lucky boys! So cute about tidying up 'in character' too!

What a great idea - my son is star wars obsessed and so is my bosses son.........Thanks for sharing, it would be a great chrissy present

You are such a good momma! He is so cute in his Jedi robe.
~jane

Hey Amandajean,
I haven't used a pattern in quite a while, either but I do remember the last time ~ the 5/8" seam looked HUGE!

Love the robe (had to hide your screen from my son's for fear that they'd demand one and I don't have time right now to sew one up...hhmm, maybe I'll have to talk to Santa!!!) Thanks for all of your tutorials!

Love the robe. I can so just see your boys, (including Kevin) getting a big kick out of them. J thought they were pretty cool, too! Glad I was able to help with the pattern question you had.

The robe turned out great! My boys are big, huge fans of Star Wars too! The robe is just the right thing for them, why I didn't think of that! Thanks for the great idea! May the force be with you ( and your boys) !

You will be ready on time for Oct. 31... lucky you! great idea for a christmas gift too!

great idea!! When my boys were small I made them plain black capes that tied at the neck. They are 8 and 12 and occasionally the capes will make an appearance in their play time!!

I wish my kids were still young enough to play Star Wars.

fabulous! i have some boys here who would love those too

awesome.... you sure are one rocking mama!!

Your son just looks so happy and pleased with himself in the pictures! I wish I had a boy old enough to make a robe for! I only know of baby boys, so I guess I will have to put this on the back burner for a few years. Great idea!!!

What a fun idea. I'm glad to see he is using his powers for good not evil. My son is too old to wear the Jedi robe but I bet he would secretly covet one.

I too made a jedi outfit for my grandson and he had many a happy hour playing the different roles. I suppose like Snow White this costume will live through time.Nice blog I liked the tutes.

Oh my gosh, I am so glad I found your blog. It is going on my blog list immediately...lol. I an new to quilting and sewing and your tutorials are fantastic. I can't wait to try out one of your projects.

My boys just got light sabers from our friends...and they are asking for a cloak now...thanks for the pattern review!

Your robes are beautiful! (Well maybe some other adjective would be better suited to Star Wars.) My sons would love them and they are 14 and 16!

I created a page, Star Wars Christmas Ornaments and Decorations, which might provide inspiration for Christmas ideas for some of the Star Wars fans out there!

Wonderful! Are you going to make Halloween costumes too or just use these?

I think I will just use these. if the kids cooperate. :)

I bet you have to get going on the second one or little P. will be pestering you. Cool.

A great making for your boys! Mine would have loved that when he was that young...?...Come to think of it, he probably would love it now too at his 6'5" size and 20 years of age! LOL! Boys will be boys... 8-)
Happy stitchings!

Great job! The pics are too cute!

Totally awesome. I have some requests now for Halloween costumes. Thanks for the information. You did super with your robe. What a riot! Kids are *sew* funny.

How ridiculously cute. The whole role playing thing is adorable. What an awesome mom you are!

Ahh, my son has decided that THIS should be his Halloween costume! Thanks :P

This is great!! I have a Star Wars obsessed boy right now who wants a Sith robe...I guess the same thing in black. I'm glad to see you liked the pattern...I found your blog looking for one! Thanks:)

These are great. I bought the same pattern and tried to make one, but ran into some problems when trying to attach the hood. The hood was shorter than the robe, and I cannot decipher how to attach the bias tape to the neck seam. Did you encounter any of these problems? Any tips you can share? Many thanks, Neeta ( nlogsetty@gmail.com )