Over Christmas break I did a lot of sitting around while our extended family was visiting. That means that I had a lot of time to knit and crochet. I found that starting new yarn projects curbed the need to start new quilting projects, which is a good thing! 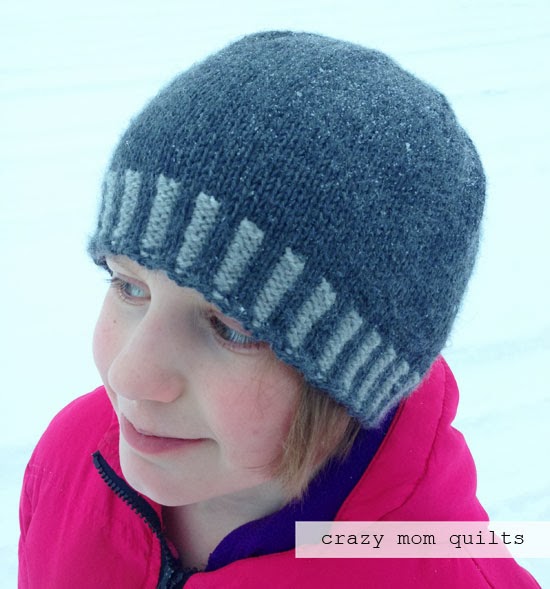 My first project was a knit hat. The pattern is called Tweedy Cap and I have knit it about 5 times or so. It's a favorite! This was supposed to be for a friend, but it ended up too small, so my daughter inherited it. (She wore it to school and has since lost it, which is a total bummer, but what are you going to do?) 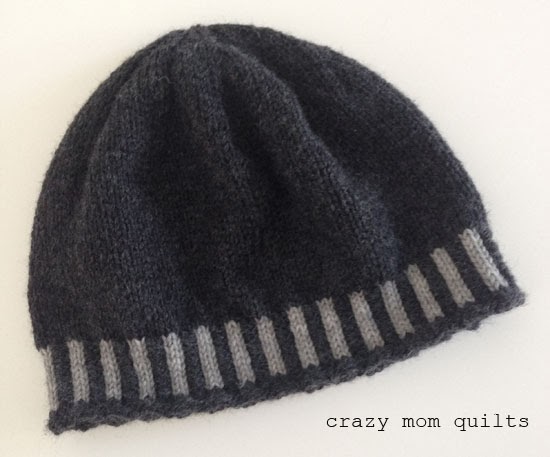 I knit the hat again and this time it actually fit my friend. Hurray! She wasn't willing to model it (and I don't blame her) so you just get a flat shot. :) 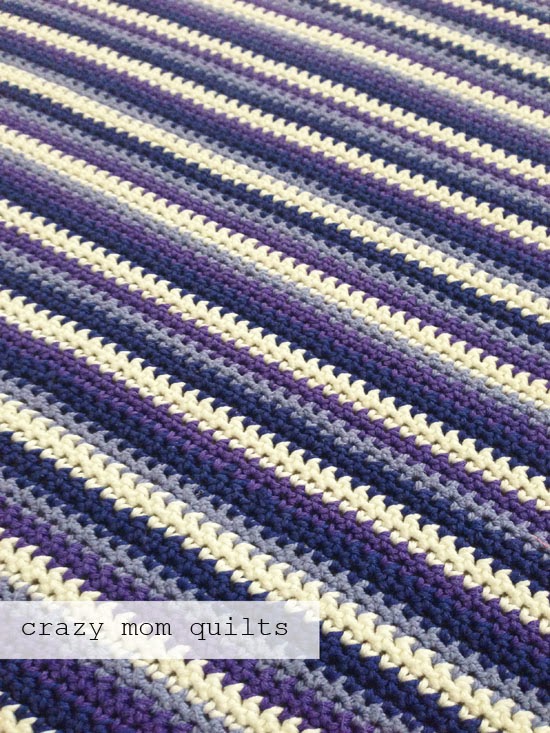 I also crocheted my girl a new blankey. Her original blankey has seen better days and I thought I would be proactive and make her a new one before her old one was reduced to shreds. 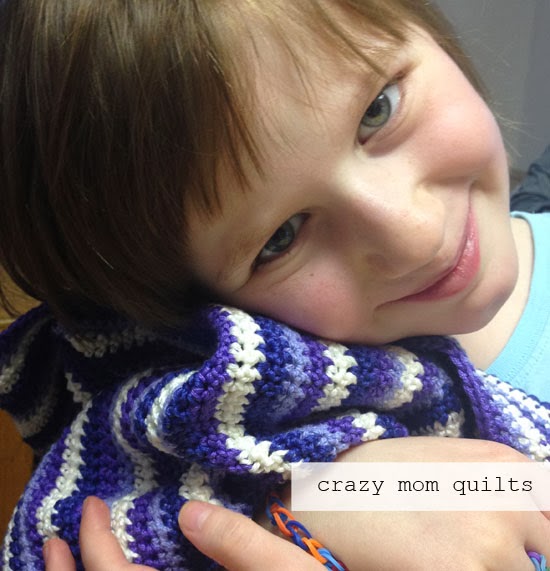 I was skeptical that it would serve as a replacement, but I think it has. Hurrah! She really loves it! I'm thrilled because I had the yarn sitting around for years. It felt great to make it into something useful. And, it's in her favorite colors!

Now that all those projects are done, I need a new one. I've been wanting to knit myself a sweater for years and years. Since winter seems to be here to stay (insert long rant here) I think this is the year. Does anyone have any suggestions for a good yarn/pattern combo? I'd love a little direction if you can offer any. Thanks!
Posted by Amanda Jean at 2:22 PM

Hi Amanda Jean! I was your tour guide at the Willow River Piecemakers Guild Show couple of years ago (New Richmond, WI) - you were promoting your fabulous book! I did lots of knitting and crochet over the holidays too - eye surgery was my excuse, could handle that, but now sewing for about a month! I have a new blog now Sewing With Kelly! LOL - hoping to get projects done and just meet more quilty friends. Stay Warm!

What do you like for sweaters? Cardigan or pullover? fairly plain or rather fancy? Cables or lace? A fairly fast knit (worsted or aran) or something lighter weight? Lots of options! That said, my favorite basic sweater yarn is Cascade 220, nice wool, not too pricey, comes in a billion colors, and you won't have time finding a nice pattern to go with.

These are lovely! I especially like the colors in your daughter's afghan.

I think this might be your Tweedy Cap pattern...

Yes, it is! thanks so much! I added the link.

What a sweet picture of your little girl! :-)

Your daughter is darling! And have you checked Lost and Found at the school for the hat? If it's anything like the school I worked at, you'd be surprised the amount of lost items there are waiting to be claimed!

Hi Amanda! My all-time favorite sweater is a raglan sweater made with this yarn: http://www.carodanfarm.com/shopsite_sc/store/html/product4.html The wool is a tiny bit scratchy, but still soft and I knit it up big enough that it always goes over another shirt anyway. I did it all in stockinette so the neck, sleeves and hem roll. Comfy, easy, quick. Love it!

Raglans are awesome because you don't have to worry very much about gauge…you just start with your neckline measurement and then try it on as you go. I can e-mail you the guidelines I used in making the sweater if you want.

Can't wait to see what you decide to make! Hugs to you!!!

I have a sweater on the go that is about 13 years along yikes! But you can check out veryshannon.com for some great suggestions and she has a book called Journey.

Just started a "top down" sweater pattern by Diane Soucy. So easy and fun, and when you're done, you're done. I am using the fabulous Malabrigo Rios yarn..so so lovely. I always have something on the knitting needles for tv watching...

Try asking Heather Mulder Peterson from Trends and Traditions. She is a quilter, Fabric designer and Knitter. She mentions Ravelry for patterns. Sorry I can't give you a link but you should be able to find her blog easy. Cindy

I love the Original Owls Sweater by Kate Davies. I've been planning on knitting it for about 4 years. I'm loving your book , by the way. It was my valentines day gift this year! Here's the link to the sweater. http://katedaviesdesigns.com/designs/o-w-l-s/

Love the blanket you crocheted. Do you have a pattern? Would love to make one of these, is it difficult?
Gauen@mbc.edu

Head over to Ravelry and be overwhelmed by the choice!
I love the blankey.

I haven't yet been bitten by the knitting/crochet bug, so I am no help. But I love the hats and blanket. Looking forward to seeing what you decide to knit for a sweater!

no, this blanket is not difficult at all! I made a foundation row then did rows of single crochet for the remainder. I changed colors after I went down the row and back again. I hope that makes sense!

That's the problem! Ha! Waaaay too many choices. :)

That's exactly the problem. Way too many choices! I've worked with cascade 220 before for other projects and I agree, it's a great yarn. Thanks for your help!

I made a Solstice recently and love the pattern/yarn combo - will definitely make myself a second one. http://fiffles-greenwaves.blogspot.ie/2013/12/solstice.html
Also knitting a tea leaves at the moment with Malabrigo Rios - it's knitting up really well and is so lovely to work with. Happy pattern hunting!

wow, you're a lady of many talents. Love those hats and a blankie.

I made the "Vitamin D" sweater by Heidi Kirrmaier for my DIL for Christmas last year. I used KnitPicks.com Brava Sport yarn in Orchid. Brava is an acrylic. I loved the pattern (well written) so much that I am going to make this again, for me this time. The acrylic is a good thing to use if you don't know how the person will take take of the garment. For mine, I will use wool.

Love that hat! I'm adding it to my queue.

The blankey turned out lovely. No suggestions on sweaters, unfortunately. But I've just pulled out my crochet basket yesterday, thinking it's a good thing to do while waiting for warmer weather. I started a striped hat for my hubby that will use up a bunch of the smaller pieces of yarn you gave me four years ago. It's about time to use it.

Love your hat and what pattern did you use for your blanket?

I don't have any sweater suggestions. I just thought I add to your long rant about winter. It has gone on far too long and shows no signs of going away. We're supposed to get another foot of snow on Sunday night. Seriously? I'm really missing Texas right about now. I know they've had a colder, icier, snowier year than normal too, but it's not as bad as up here. Okay. Rant over. Love the hat. LOVE the quilt blocks. LOVE. THEM.

I have a fantastic book you can borrow if you want. It gives a basic pattern for a few different top down sweaters using your measurements and however many stitches per inch the particular yarn and needles you are using turn out. I love it because you don't have to go and find a specific yarn, or a replacement yarn if you can't find that one... etc. You can also pretty much use whatever circular needles you have on hand as long as they are long enough to handle the width of the sweater. The sleeves use either a short circular or DPNs, so you do need a set of them in the same size as whatever other needles you used. It's a little tricky to read the book at first, but you'd soon get the hang of it. I have made two sweaters using it so far and I have a third in progress. None for myself though, LOL

Oh, and if you haven't checked out Knitty.com it is high time you did... Sooo many pretties...
:)

I'm in MN too! And I'm so grouchy because of this stinkin weather. Anyway, it's good weather to craft right? Definitely check out the sweater patterns at Quince and Co. They're all gorgeous! LOVE your blog and I have your book! :)

Aw, that is so great when kids love something that you make!! Lovely hats :)